Attending the American Film Market this year, I learned that episodic content (i.e. series) are a hard sell, unless you’ve got at least one full season completed and ready, especially with adult animation, where [adult swim] seems to be the only game in town (although recently Netflix Animation is putting out a bunch of animated series aimed at adults, too).

So you get the chicken and egg problem: no money for your series unless you’ve got a full season ready, no way to produce a full season without money (without a proper team and funding to quit my day job it would take me around 6–8 years to complete 10 episodes).

So the film markets are really mainly for feature films. Some distributors were interested and liked my work, but always asked the same question in the end: do you have any feature films?

I’m not going to give up Phungus & Mowld – the script for episode 3 is completed and I’ve started drawing storyboards – but I might have to put it on the back burner, if I want to make some money and become serious doing original animation as a business.

So lately I’ve been revisiting my other project, Shadywoods, I first drafted a pitch deck for Shadywoods as a series, and even drafted story outlines for four episodes, but then I remembered that a long time ago I intended to make Shadywoods a feature length movie, so I dug out my old scripts for the screenplay, and I’m starting to combine ideas for the series with some of the stuff I originally intended to go into the feature film. The plan is to put together a pilot that could either pass as a short film of 40 minutes, or if I have enough material, a full feature of 60–90 minutes, which should be a much easier sell than a series with two episodes, and could become the start of something bigger.

If that succeeds I can not only make a some money from the pilot (I don’t expect much), but hopefully get enough exposure to find funding for either producing Shadywoods as a series, or season 1 of Phungus & Mowld – whatever I get funding for first.

I was born and raised in the southwest of Germany. Despite having lived 10,000km away for almost 25 years, I still feel a deep connection to the area: the Black Forest, Switzerland, lake Constance and all the local folklore in the region where France, Switzerland and Germany meet and the common language – my mother tongue – is a German dialect called Alemannic.

I also like the original Brothers Grimm fairy tales for their crass and rather dark endings, not like the sugar-sweet versions of Disney or many of the modernized versions, that tend to alter the true (macabre) ending of some of the originals. So I was wondering: couldn’t I create a fantasy world, loosely based on some of the folklore, spirits, and stories of the region mixed with my own stories and ideas, sprinkled with some black humor?

So currently I’m trying to put together a script for a Shadywoods feature, all the while I am still churning out storyboards for Phungus & Mowld episode 3 “Origins”.

To Cut a Long Story Short

In the mean time I’ll try to put out some vlogs, and from time to time post concept art, animation tests and rig tests to keep you up-to-date on the progress of everything, but know that I haven’t given up or stopped producing content, I’m just realigning my focus.

Now, that Phungus & Mowld episode 3 is in the can, I want to focus on another project that has been stalling for... 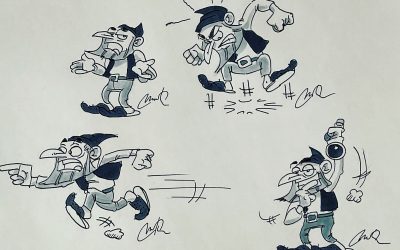 On the Scarcity of Yourself and Time in General

No matter how I rethink it, optimize my workflows, no matter much I improve my productivity – there’ll always only be...

This site uses Akismet to reduce spam. Learn how your comment data is processed.